Every serious tennis player needs a coach as there needs to be a mentor with more experience and knowledge about the game that can guide the player through various stages of competitive tennis.

The coach is responsible for planning and executing the training sessions with the player and also to help the player analyze their game and performance in matches.

Coaches have been using various tools to analyze player’s game from very simple ones like a sheet of paper with some notes on it to more sophisticated video analysis software that allows side by side comparison.

Here’s a quick overview of the most effective tools a coach can use to help the player improve his game:

a) Aggressive margin analysis on paper 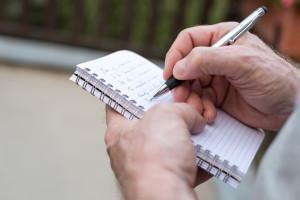 The aggressive margin shows the difference between points won by the player either through winners or forcing shots and the unforced errors.

A positive aggressive margin tells us that the player created more points through aggressive play than he lost through unforced errors.

We can also simplify it for the player and say that if his aggressive margin is negative, he is beating himself as he is reponsible for losing more points through unforced errors than winning them through aggressive play.

The main goal of this statistic then is to help the player find the proper risk ratio so that his aggressive margin is positive and that he can only lose the match if his opponent is better in creating points.

We can easily note this by drawing a few columns on a sheet of paper and noting down for each player:

We then add up winners and forcing shots and subtract unforced errors and determine the aggressive margin.

For a more detailed analysis we can mark forehand shots with F, backhand shots with B, winning serves with S and double faults with DF in the unforced errors column.

As the technology evolves, we can move from making match notes with a pen to a notation through smartphone apps which provide is with much more detailed match analysis.

Smartphone apps now allow the coach to input much more data besides winners and unforced errors.

Some of the additional parameters the coach can input in the app are:

Through this detailed input, the coach can then access much more detailed match analysis that can show him:

Some of the best smartphone apps currently on the market are Tennis Math, Tennis Stats Pro and Tennis Trakker Pro which we have reviewed in one of our previous articles.

a) Video analysis of technique

The most effective way to work on technique of the strokes with a player is through video analyis. That’s because in most cases when a player is performing incorrect technique, they are not aware of their mistake. 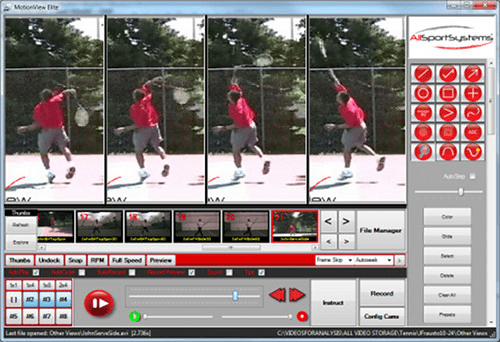 Verbal corrections usually don’t work in these cases and only video analysis, especially side-by-side comparison of our player with a professional player helps them see what the mistake is.

There are two smartphone apps that are worth mentioning and that work really well: Ubersense for iOS (Apple) and Coach’s Eye (Android).

They allow immediate side by side comparison and many more additional tools like drawing tools, angle tools and even timing tools so that you can measure the amount of time it takes to execute a stroke or prepare for it.

The other type of video analysis software are used on desktops and laptops and fall into the category of general video editing programs like Cyberlink Powerdirector, Adobe Premiere Pro and Apple iMovie.

The other category are the sports specific video analysis programs like Dartfish, V1 Sports and Silicon Coach.

These are much more sophisticated as they allow video analysis in full HD, side by side comparison with a recorded narration and much more.

b) Video analysis of matches

One other part of the game where players find it very difficult to objectively assess their game is match play. 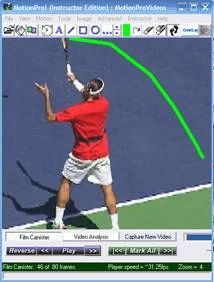 They are often times under a lot of pressure, they experience many events in the match very emotionally and that prevents them from objectively analyzing their game or even accepting a very objective feedback from the coach.

Recording the whole match, especially from back view, gives the player a really good look at what happened in the match and points out very obviously what worked and what didn’t.

A very good exercise for the player is to watch his match in replay and at the same time input the data either manually on a sheet of paper to calculate the aggressive margin or to input the data in the smartphone app and eventually see the stats.

That helps them note the facts about the match and NOT rely on their subjective opinion of how points unfolded in the match.

Another very effective way to use the match recording is to edit and compile only the successful points of our player and have them watch these points over and over again as a confidence boosting method.

This has proven to be a very effective method of pre-match confidence booster as they player sees himself performing well and at the same time visualize his best patterns of play which helps him execute them better in the upcoming match.

In summary, as the game of tennis evolves so must the coaching methods. As the coach develops more effective drills on the court through experience and education, so must his methods of stroke and match analysis.

The next step in tracking and analysis of the player’s performance are the digital devices that the player will wear during the match.

This will provide both parties with factual data of player’s movement, swing speed and other factors that will speed up the improvement process of the player even more.