Notation (performance analysis, match charting…) of a tennis match is crucial for analysis of player’s strengths and weaknesses which include all four main areas of tennis: tactical, technical, mental and physical.

It is also vital to the coach who needs to structure future training sessions based on player’s strengths and weaknesses shown in the current match.

“Noting” key points about player’s performance only by watching the match and trying to remember them will not produce quality assessment nor objective feedback to the player.

Firstly, there is a massive amount of data that can be gathered in a tennis match which cannot possibly be remembered.

Here are just a few examples of what a tennis coach may be looking for when assessing his player’s performance:

And secondly, our notation and analysis will always be subjective because of our beliefs, emotional states and attitudes that are our clouding our judgment.

So objective and detailed tennis match notation is the key to gathering relevant information about our player’s performance as well as collecting key information about the current opponent which may be used in the future matches for developing a winning strategy against him or her.

Match Notation In The Past

Before the era of computers, tablets and smart phones, coaches often resorted to match notation on the paper.

We scribbled down notes in various ways trying to get as much key information about the match as we could in those short times between points or games when we could finally note what we observed in the previous points.

Our notations were very simple and often times very messy as we carried around sheets of paper or worn out binders.

There weren’t many good systems known and available before the explosion of internet and they were hard to find as only a few tennis books at that time also included author’s suggestion on how to accurately assess and analyze tennis matches.

A simple match notation included marking first serves as in or out and winners and unforced errors.

While this way of making notes of a tennis match was quick, it lacked the depth of information which is needed for a detailed match analysis and planning of training sessions.

If a coach wanted to note down more information, he would barely be able to follow the match and note his player’s behaviours and tactical decisions because for most of his time the coach would be marking down lots of notes from the previous point.

By comparing the stats of both players we can quickly see the main differences in each stat and why one player eventually prevailed over the other.

Just to get this very common statistical analysis of the match, a fair amount of data had to be gathered, namely noting the outcome of every first serve, outcome of every break point and how each point ended where only winners and unforced errors were noted but not forced errors which actually play a key role in modern tennis game.

The above analysis doesn’t for example show to which side player may have served better or even to which corner he serves better or worse.

It doesn’t show whether break point conversions were actually done with an aggressive play of the returner or whether the server made a double fault or hit an unforced error.

It doesn’t include with which strokes the player hit his winners and with which shots he committed unforced errors.

It also doesn’t show at what score situations player committed unforced errors. If he had lots of unforced errors on game points and break points that can point out to mental weaknesses of the player rather than technical or tactical ones.

With a more detailed match notation and smart analysis of the data the player and the coach could have gained much more useful information.

Once the coach extracts relevant data from the notation, he can better assess his player’s strengths and weaknesses and plan training sessions accordingly.

Here are just a few quick examples of how a coach could plan his training sessions with the player based on the notation its analysis:

Thorough match notation provides very accurate information on the player’s specific strengths and weakness and helps poinpoint those key deficiencies that may turn the match around.

Since each player in time develops their preferred game stlye, the coach’s role is to maximize the player’s strengths and minimize player’s weaknesses. 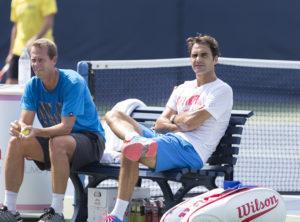 While an all court player like Roger Federer benefited immensely in 2014 from an expert on the net game like Stefan Edberg, a counterpuncher style of player like Andy Murray benefited very much from having Ivan Lendl as a coach since he won his both Grand Slam titles in that time period.

A positive statistic in net points and not so convincing statistic on the baseline helps an all court player decide more easily to keep charging the net at the right opportunities.

For a different type of player, having a very low number of unforced errors might have been a key to playing well at lower levels, but it also shows a lack of aggression and willingness to take chances on key points in the match.

The higher level of players you deal with, the smaller the differences are and the more detailed the notation has to be in order to point them out.

The smartphone and tablet affordability and proliferation has enabled easy access to high processing power of computers and much more effective and detailed input of data throughout the match.

This has of course sparked a huge creation of smartphone apps which help the coach gather much more data throughout the match and also extract much more useful information from it.

Some of the most popular smartphone apps for tennis match notation currently on the market are:

And while all this technology gives us plenty of data and stats that helps us improve player’s tactical game, one question remains open: how can we track our player’s mental states during the match?

What if we could measure certain body parameters and correlate them with the reactions, behavior and performance of the player throughout the match?