The Ideal Performance State (IPS) is a term coined by Dr. Jim Loehr, a renowned sports psychologist who worked with many of the top tennis players on their mental game.

It describes the mental and physiological state of the player who is performing at his peak performance. In other words, the performance is directly related to how you feel inside. 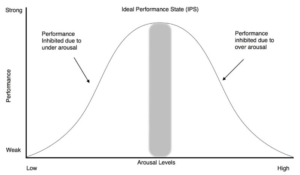 Mihaly Csikszentmihalyi who also researched this elusive state came up with the term “flow” and “playing in the zone” to describe that ideal mental state of an athlete that is playing at his best.

When top players who exhibited this peak performance in certain matches were asked to describe in more detail how they felt and how they experienced this state, their answers showed that IPS has many common characteristics that applied to almost all of them.

They reported feeling some or all of the following:

And as Pete Sampras and many others liked to say: “I played in the zone.”

That was their simplified explanation of the state they were in when there was not much conscious thought, all their decisions in the match were instinctive, based on years of training and match play, and while they experienced challenge facing another top player, they felt confident in overcoming the challenge and winning the match.

How Can You Achieve IPS?

Since tennis is a fast game when the ball is play the only time a tennis player can control his state is between points and changeovers.

Dr. Jim Loehr has devised a 4 stage process based on analysis of hundreds of tennis players and how they behaved during points.

Whether the player wins or loses the point, they will make a quick decisive move with their body.

If they won the point, then they may simply amplify what they feel and pump their first or even give themselves a short “C’mon” in order to maintain that high energy and high confidence and carry it into the next point.

If they lost the point, they will accept it as a part of a very challenging game and maintain positive body language by keeping their shoulders back, head high and start moving back to the baseline with energetic steps, not projecting any negative emotions.

The racquet usually goes in the non-dominant hand with the eyes forward and down. This a short stage and it typically lasts between 3-5 seconds.

The goal of the relaxation is to recover physically and emotionally from the previous point.

Typically the players will focus they eyes on the strings of the racquet, walk slowly behind the baseline and control their breath looking to lower their heart rate and enrich their lungs with more oxygen.

There shouldn’t be any complex thinking in this stage beyond simple phrases such as “relax, calm down”.

This can be the longest stage of all four depending on how phyically and emotionally demanding the previous point was and it typically takes between 6-15 seconds.

The preparation stage begins when the player moves into the position to play which means he prepares for the serve or for the return. 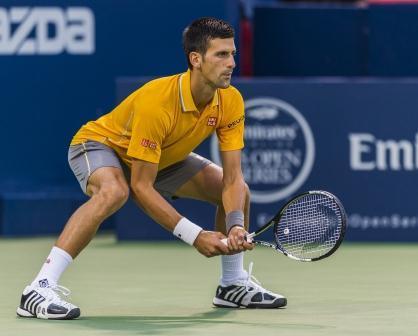 This is where he runs through his mind the tactical patterns he wants to play or perhaps simply reminds himself on the return that he needs to see the ball clearly off the bounce in order to make a clear return deep down the middle.

It’s important that the player doesn’t overthink in this phase and sticks with simple and yet effective patterns of play that worked for him so far and leave more complex point analysis for changeovers where he has much more time to analyze them and possibly adapt his tactics.

The server can for example aim for a wide serve and plan to follow it up with a shot into the open court, ideally with this forehand.

Or he can plan serving a high percentage first serve to the opponent’s weaker side and look to dictate the point from then on.

The returner on the other hand should quickly run through the options of where and how he wants to return if he receives the ball to his backhand or if he has to return with the forehand.

If he faces a more consistent player without major weapons, he can return slower, higher and more consistent shots deep down the middle in order to start the rally in a neutral position but if he faces an opponent with a powerful forehand, his first target should be the backhand of his opponent.

This stage doesn’t take much time when the player is well versed in it and it takes about 3-5 seconds.

The goal of this stage is to maintain good relaxation and deepen concentration before the next point.

If the player is serving, then the ritual usually includes bouncing the ball a few times, taking a deep breath, visualizing the serve and eventually executing it.

Many players engage in various little movements that settle them down before the serve like fixing their shirt, adjusting their hair or headband, blowing in their hand and so on.

If the player is returning, the ritual usually consists of finding their optimal position behind the baseline, adjusting their feet and flexing their legs in order to become highly alert as there will be very little time for reaction and execution of the return.

Each player should in time develop their own routine that helps them achieve deep focus and alertness and stick to it no matter what the score is.

This stage takes from 5-8 seconds therefore the total of all four stages ranges from 16-25 seconds.

The 3 Channels of Controlling IPS

When a tennis player works on achieving Ideal Performance State, he can do that through 3 main channels / ways:

The key attitude associated with IPS is confidence. Confidence means that the player believes he can overcome the challenge he faces. He believes in his skills and his ability to solve problems when they arise during the match.

The confidence of a player can quickly disappear through negativity which happens because of negative self-talk.

That brings us to the next channel which are our thoughts.

A tennis player striving to reach his IPS in practice and in matches must firstly become very aware of his self talk and notice when it becomes negative.

Some examples of negative self-talk are:

When a player notices these and other negative phrases, he needs to replace them with positive ones like:

By controlling his thoughts the player also controls his emotional state and consequently his body feelings which provide him with yet another way of controlling his state.

The IPS is associated with feeling relaxed yet alert, feeling very quick and coordinated.

The player can control his level of relaxation through deep breaths and contracting and releasing his muscles in between points and also by exhaling while they swing through the ball during points.

If the player needs to raise his level of alertness and activation, he can do that through small jumps and quick breathes while getting ready for the next point.

With practice the player develops better and better control of his state through managing attitude, thoughts and activation control (body feelings) and is able to achieve Ideal Performance State much more often.

One question remains though: is there a way to objectively measure player’s state throughout the match so that we could therefore track and see how it correlates to his performance?

What kind of data would help determine player’s state in the match and help them find their IPS more quickly and more frequently?