The main goal of evaluating player’s performance in a tennis match is to improve performance under pressure and to decrease the risk of injury.

We can evaluate player’s performance in two ways:

The qualitative analysis is a subjective analysis where a coach evaluates and assesses player’s performance based on his observation of strokes, footwork, tactics and other elements of the match.

The quantitative analysis is more objective as it’s based on measurements. We can measure biomechanical variables related to a particular stroke with various measurement devices like a radar gun or through video analysis software after recording the player during the match or practice.

The process of qualitative analysis consists of 4 tasks that cycle through and develop a continuous process of improvement in the long term.

The first task involves acquiring more knowledge about a certain stroke or element of his performance that the coach wants to analyze. The coach acquires that knowledge through conferences, books, videos and studying the subject in the long term.

The stroke in question needs to be observed from different angles in different situations as to best assess and it’s quality, especially when played under pressure.

One of the best ways to accomplish that is through video recording as the technology allows us to see what the human eye cannot normally see. Human vision can capture only about 4-5 frames per second (FPS), while a camera captures 25 FPS (Europe / Australia / Asia) or 30 FPS (USA).

Most modern cameras now allow high speed footage with 120 FPS or more which when combined with a high shutter speed (1/500 or 1/1000) provides the coach with extremely clear footage of player’s strokes and movements.

The only disadvantage of video recording is that the eventual image is displayed in 2 dimensions that’s why it’s important to record the player from multiple angles in order to get a better view and understanding of the stroke in real 3d enviroment.

The coach needs to determine strengths and weaknesses of the stroke and diagnose the cause of possible poor performance.

The main question for the coach at this stage is to determine the main causes of stroke’s weakness. They can originate from:

Once the coach has determined the causes of poor performance, he needs to prioritize his interventions and start helping the player correct the flaws. The coach can intervene through verbal feedback, manual / kinesthetic guidance, video demonstration, visualization, etc.

To get objective data about tennis player’s performance, we need to measure it and that’s the role of quantitative analysis.

The three main ways of measuring and recording data about player’s performance are:

The tools for match play notation and statistics are nowadays very affordable or even free with the smartphone and tablet apps that allow the coach to quickly and easily note particular elements of player’s performance and get detailed statistical data that the app calculates during or after the match.

Most smartphone apps for tennis notation and analysis can provide the coach with tactical feedback based on the data he inputs. The movement of the player is much more challenging to record so this requires more sophisticated and expensive equipment like the HawkEye which not only tracks the ball and its trajectory but also tracks player’s movement.

Some of these can be measured with advanced video analysis software like Dartfish.com or SiliconCoach.com, for others the coach would need to use motion capture systems like Vicon.com which can provide a 3d graphical image of the player’s motions.

The most practical applications of quantitative analysis come into play when the player experiences pain in a particular body part or when the coach determines that the player lacks certain physical qualities which can be directly measured.

The most common injuries originate in the wrist, shoulder, lower back and knee areas and with detailed quantitative analysis we can find causes of the injuries and work to eliminate them.

The force platform on the other hand assesses the explosiveness of the player when it comes to leg drive on the serve or the first step towards the ball after the split step.

The International Tennis Federation (ITF) has announced a change in rules in 2014 which allow the use of “smart” equipment during competition and to permit access to the information generated by that equipment at times when coaching is allowed. 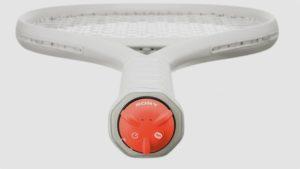 This smart equipment is collectively known as Player Analysis Technology (PAT) and falls into 3 groups:

Equipment which does not record player’s performance but may peform other functions of PAT.

In order to record different data (like force, movement and physiological information) from the player, their strokes and movements, PAT devices typically use sensors such as accelerometers, gyroscopes, cameras and electrodes.

The first rule change states that PAT devices are permitted during the competition but only if the PAT has been approved by the ITF prior to the match.

The second rule defines PAT devices in detail and restricts its use during matches so that the data can only be accessed after the match or during the match if coaching is permitted.

In summary, all PAT devices developed so far have focused only on providing the coaches with data that helps them assess player’s technique and their tactics.

But as we all know, the mental game is the key difference when it comes to higher levels of tennis.

Imagine being able to measure the mental state of our player with a PAT device.

How would that help you improve his performance in matches?