“That sixth Wimbledon (title) against Andre Agassi I got in the zone,” said Pete Sampras in one of his interviews. 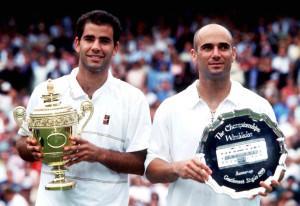 In another interview Pete elaborates more on what it means to be in the zone:

Pete says: “When I toss the ball up, my arm swings and my body takes over. It just clicks. It’s about repetition as a kid; it’s about good technique; it’s about having everything in place. It’s about confidence and muscle memory. It’s the 10,000 hours.”

The question so many athletes ask is then:”How do I enter the zone where I can play at my peak performance?”

The term “The Zone” became popular after Mihaly Csikszentmihalyi published his book “The Psychology of Optimal Experience” in 1990.

In it Mihaly describes the flow or the zone state which can occur only when there is a balance between the challenge of the task and the skill of the performer.

If the task is too easy or too difficult, flow cannot occur. Both skill level and challenge level must be matched and high; if skill and challenge are low and matched, then apathy results.

And this is what Pete Sampras alluded to – namely being confident in your skills and technique and of course having them in the first place. And having such high level skills of course takes many years to master.

What Does It Take To Enter The Zone?

We can take a look at these requirements from the short term and the long term perspective.

If a player wants to be able to enter the zone, he must be skilled enough to deal with the task in front of him.

We don’t necessarily need to reach world class levels of certain skills, regardless of the sport, but only reach high enough level that can overcome the challenge we face.

A competent recreational tennis player or a junior tennis player can therefore also enter the zone as they are facing their peer who presents them with just the right level of challenge that they can still overcome.

In order to prepare the player to successfully deal with the challenges ahead, we need to equip the player (or athlete from another sport) with the necessary skills.

These typically include techniques, phyical skills, tactical and mental skills.

In all of these areas the player must look to eliminate weaknesses and improve his strengths.

Technique training: From technical perspective, the player must develop all strokes to a high level and be able to adjust to different situations in the match.

Some players may for example hit great forehands when they can set up well for the shot but hit very poorly when they are on the run.

The coach must therefore be very systematic in his training programme in order to cover the most common and the most critical situations in matches and make sure his player can handle them well from the standpoint of technique.

Tactics training: Players who describe being in the zone often times mention that they played “out of their mind”.

That means that their tactical response to a certain incoming ball and a certain situation was automatic and instinctive and not based on conscious analysis.

This can only happen if many patterns in the game have been practiced over and over again so that when the player encounters a certain situation in the game, he instantly recognizes it and responds immediately with the correct decision.

Pyhsical training: One of the not so obvious sources of confidence for top tennis players is their physical condition.

While we may think at first that confidence is something that happens only in the mind, it’s actually based on the physical state of the player.

If the player feels he has enough stamina and speed to deal with everything that opponent throws at him, that he will feel very confident in dealing with the challenge in front of him.

Confidence is that key feeling that allows the player to stop worrying, stop thinking and allow the subconscious to take over.

Mental training: As mentioned before, one of the keys to entering the zone is confidence. And the key to becoming more confident player is to be very positive.

Therefore the player must at first become aware of his internal self-talk and change to a positive one if it’s negative.

The opposite of confidence is doubt and doubt exists when there is constant negavitiy and criticism in the player’s mind.

The next key skill that a tennis player needs to enter the zone is the ability to stop thinking, to shut off his conscious mind and simply play the ball from his instinct.

To practice getting into this state of “no thought”, the player must engage in drills where has can practice that.

These must start as non-competitive drills first so that the player can practice with no pressure.

By playing certain patterns of shots like 2 cross / 1 down the line and similar ones for extended periods of time, the player will very likely enter the zone in practice.

Once he becomes aware of this this mental state “feels like”, he will have a reference point for the future and be able to recall it and access it more likely even in match situations.

Another critical mental skills for entering the zone during the match is the arousal control.

By practicing in the long term how to control his arousal / activation state, the player becomes more acutely aware of his energy levels and emotional states and in time learns much better how to control them. 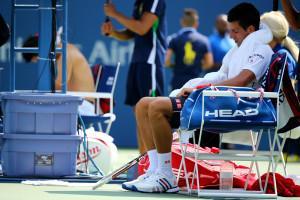 As the date of the competition is coming closer, the player needs to apply visualization techniques with which he sees himself performing well in the match.

The player programmes his subconscious mind with his ideal performance and is therefore much more likely to recall it and execute it during the match.

He needs to see himself execute his preferred patterns of play and successfully deal with mentally challenging situations in the match like facing break points or serving for the match.

Techniques For Entering The Zone During The Match

While most players experience anxiety at the start of the match and are unable to enter the zone from the start, most of them also overcome those feelings after a few minutes of playing.

After this initial period the player is much more likely to enter the zone and the key skill to accessing the zone is following the rituals after each point.

The player will have by now established his preferred rituals before the serve and before the return of serve and by strictly following the rituals and controlling his breathing, he increases his chances of entering that elusive state called the zone.

In summary, the zone state of mind is not always accessible to the player, but with proper long term and short term preparation and by applying rituals, arousal control and breathing techniques during the match, the player increases the chances of entering the zone and playing at his peak performance.

What coaches and players would surely appreciate as a help in getting in the zone is objective data of player’s mental state during training and matches.

This would show them how close or far the player was to the zone state and help them devise strategies and techniques for reaching that elusive state more often.