The main role of the parent is to encourage and support their child. A tennis match is a very stressful situation for a young person since they need to play out and finish the match on their own without any help from the outside. 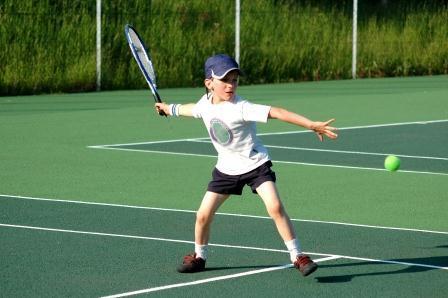 That’s because tennis rules in most cases do not allow coaching which means that even the coach cannot give any advice to the player during the match.

The young player is therefore alone on the tennis court and the only way to help them is to encourage them with short words and gestures.

There are many situations in a tennis match where the player experiences frustration, disappointment and sometimes even anger and unless they manage their emotions well, they won’t perform well.

The role of the parents is therefore to help their child manage their emotions by always being positive and encouraging and showing the child through their body language and facial expressions that they always believe in them.

The Different Roles of Coach and Parents

While the parent’s main role is emotional support during and in between matches, the coach’s role is more complex. 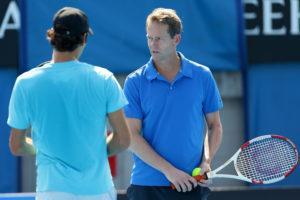 The coach needs to prepare the player mentally, tactically and often also physically before the match and help the player maintain their ideal performance state during the match as much as possible.

While coaching is officially not allowed during matches, there is no denying that there is some level of coaching going on at all levels of tennis competition where the coach signals to the player through their previously agreed signals on how to adjust their tactics or manage their activation state.

The coach therefore takes the role of the mentor and expert that can help the player tactically and mentally deal with the upcoming match, whereas parents needs to provide that safe haven for the player when it comes to emotions.

The supportive role of the parent starts with the journey to the tournament. The main goal of the parent is to de-stress the enviroment.

That does not mean that they should focus only on their child, in fact, they should de-stress themselves.

There are many elements we cannot control like traffic on the way to the tournament, the draw, the court on which the player has to play, the weather or the surrounding noise at the tournament site.

The parents should not obsess and complain about the things they cannot control as their emotional state will undoubtedly transfer onto their child with which they share a deep bond.

That deep bond means that both parties share their emotions.

Therefore the child will feel what the parents feel compunded with additional pressure and consequently anxiety from the upcoming match.

The parents therefore need to compose themselves and the conversations with their child should be positive and encouraging.

Crossed arms and legs are very obvious and common signs of being displeased or in a bad mood and those signals definitely do not help the player overcome their own mental challenges on the court. 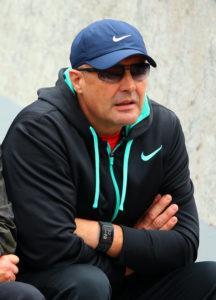 The parents should sit or stand in a relaxed and comfortable position and remain calm and always encourage the player, especially when they make mistakes.

The parents shouldn’t lean on the fence and be too close but also not too far where their encouragement couldn’t be heard or seen.

The Objectivity Problem And How To Deal With It

Because the child is the only focus of the parent for so many years, and because the parents feel what the child feels while playing the match, it is impossible for the parent to objectively assess and analyze their child’s performance simply by watching the match.

The parents’ perception is skewed because of their loving feelings for the child and that results in judging mistakes often too harshly, not praising (or overpraising!) good shots enough, thinking that missing easy sitters happens only to their child and so on.

The best way to minimize the problem of subjectivity, meaning not being objective, is to note the stats of the match using a smartphone app or a sheet or paper.

Notation of the match is a factual recording of winners, unforced errors and other stats which help both the parent and the player see the performance as it was and not skewed through the lens of subjectivity and emotions.

Being occupied with the notation or match charting also takes parent’s mind off the emotional part of the match and helps them engage more the logical and analytical part of the brain which further helps them feel and project a more calm and relaxed image which is what their child needs to see in the ups and downs while playing their match.

In summary, the role of the parents is to provide that safe haven for their child when they are in a very stressful enviroment of the tournament or in the middle of the match.

Since the child can easily detect their parent’s feeling simply by reading their body language and facial expressions, the parent needs to control their emotions and what they project to their child.

A very good way to emotionally disengage from their child’s match is to note or chart the match using one of the popular smartphone apps for tennis match notations.

The process of focused attention on recording the stats from the match helps the parent become more calm during the match and consequently assess their child’s performance after the match based on facts and not on emotions.